Welcome to The Christian Life Center

Come JOIN a congregation that believes ALL the Prophets have Spoken. We Believe.

As I perused the most recent Catch the Vision magazine with its many articles about "proving" the "men who fell to their deaths off the bridge", the Cloud, and other prophecies of William Branham; I wondered to myself, "is this the way to prove that God is real or that he visited us here in America from the Second World War to the mid 1960's?"

There is no doubt that even long time believers have needed their faith "shored up" since the recent events. The Pastor of Branham Tabernacle, Bro. Willard Collins, his grandson, John Collins has come out openly opposing the faith of his youth and suggesting numerous explanations for William Branham's prophecies or simply saying they are not true. It was only last week that Pastor Sidhu received a phone call from a "long-time" believer and self-titled "searcher of truth", bemoaning that his faith was shaken with all these allegations. He felt the information couldn't be ignored. Others must feel the same way since now many are producing pamphlets or internet articles refuting these allegations.

If one never truly believed in the first place, then does one think researched exhortations can really change you back again? Perhaps, but just until the next round of doubt comes across the internet; then "here we go again!" What about your own personal witness? How can you convince others of the truth that you hold so dearly as a "pearl of great price"? And if you do manage to persuade them with your conclusive arguments, then what about 30 years later when they come back questioning? What new argument will re-convince them? After all, the large respected religions have exalted prophets, people who were either unique in time or so influential they affected the events of their country or even the world. What makes William Branham, whom we follow, exceptional among them?

Whilst this has been a dilemma for apologetic Christians for Millennia, God has supplied the answer. Believe the Sign, the Sign of the Messiah. It is in fact the very sign that proves without a doubt that Jehovah is present. God in all his wisdom knew that we would need a Sign of His presence. He knew that we would have neither the time nor inclination to research every prophecy or "prove" everything He said was true so He provided us a Sign. This unique Sign He reserved for Himself. 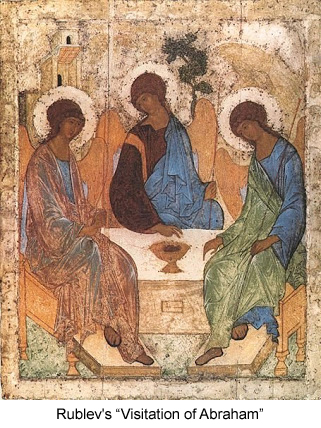 The Sign – God the Father:
I wish I could tell you the date, but dates are not important to God, only memorials; however in the early ages, God Himself became a man, and visited His prophet Abraham, there he performed His Sign. The Bible tells of this event in Genesis 18:

1. And the Lord appeared unto him in the plains of Mamre: and he sat in the tent door in the heat of the day;

2. And he lift up his eyes and looked, and, lo, three men stood by him: and when he saw them, he ran to meet them from the tent door, and bowed himself toward the ground,

3. And said, My Lord, if now I have found favour in thy sight, pass not away, I pray thee, from thy servant:

9. And they said unto him, Where is Sarah thy wife? And he said, Behold, in the tent.

10. And he said, I will certainly return unto thee according to the time of life; and, lo, Sarah thy wife shall have a son. And Sarah heard it in the tent door, which was behind him.

11. Now Abraham and Sarah were old and well stricken in age; and it ceased to be with Sarah after the manner of women.

12. Therefore Sarah laughed within herself, saying, After I am waxed old shall I have pleasure, my lord being old also?

13. And the Lord said unto Abraham, Wherefore did Sarah laugh, saying, Shall I of a surety bear a child, which am old?

14. Is any thing too hard for the Lord? At the time appointed I will return unto thee, according to the time of life, and Sarah shall have a son.

15. Then Sarah denied, saying, I laughed not; for she was afraid. And he said, Nay; but thou didst laugh.

Here we see God the Father use the Sign, he knew Sarah's heart and told Abraham, and then he did a miracle by changing them back into young people again. 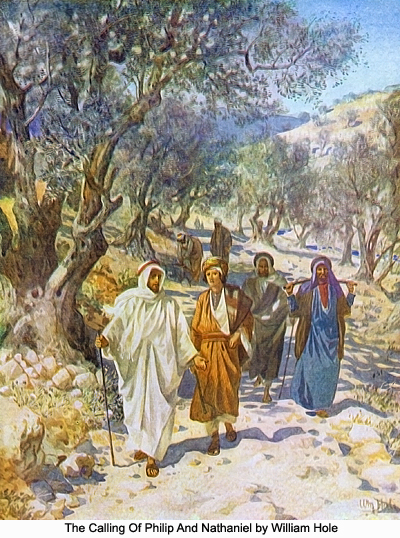 The Sign - God the Son
Jesus used the sign, and also did miracles. Once in performing the Sign, He saw a vision (does this sound familiar?) as told by John 1:

45. Philip findeth Nathanael, and saith unto him, We have found him, of whom Moses in the law, and the prophets, did write, Jesus of Nazareth, the son of Joseph.

46. And Nathanael said unto him, Can there any good thing come out of Nazareth? Philip saith unto him, Come and see.

47. Jesus saw Nathanael coming to him, and saith of him, Behold an Israelite indeed, in whom is no guile!

48. Nathanael saith unto him, Whenceknowest thou me? Jesus answered and said unto him, Before that Philip called thee, when thou wast under the fig tree, I saw thee. 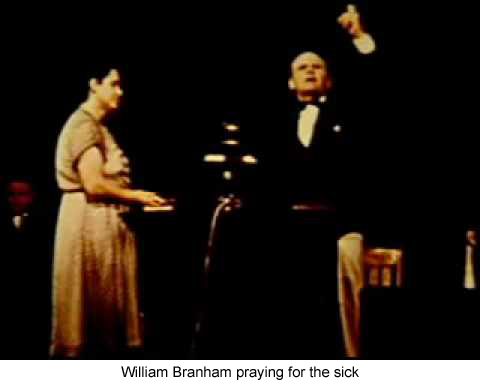 The Sign – God the Holy Spirit:
For the third time in History we see the Sign performed again right here in the United States in a small statured man from Kentucky. His name was William Branham. This Sign as before, knew the secrets of people's hearts, saw visions and performed the miraculous – from the message, The sign of the Messiah preached on March 29th, 1959:

64. Now, lady, I just want you to look at me just a moment. I want you to believe with all your heart. And I have no more idea what you're here for, who you are, than nothing. But God knows all about you. But if God will tell me what you're here for, then you'll believe that Jesus Christ, God's Son, is here to do and act the way He did when He was here on earth? Will the audience believe with one accord?

66. Now, here we are; the scene is set. We've both got our hands up; we're strangers to one another. The Holy Spirit wrote the Bible, said these things would happen in this day, that Jesus would raise from the dead and these things would go on, His ministry would continue, and in this last days it would be just exactly the way He promised it to be. Now, is it right?

The lady, as she's nervous, of course. She's rubbing her hands because she's feeling strange at this time. It's not because she is standing at me; I'm her brother, wouldn't make her feel that way. But she's--she's conscious that something's going on. And you see that picture there with that Light over it, sister? That's what makes you feel that way. That's that Angel of the Lord. It's right over you now. And you're here for me to pray for you, for a back trouble that you're suffering with. That's right. Raise up your hand.

68. Now, do you believe? See, makes known the secret of the heart. Just like He said, "You have five husbands."
You say now... Now, the newcomers, you might say, "Brother Branham guessed that."
Let's see if It guessed. I believe It said you had back trouble. Was that right? That was the truth? And you--you've had a operation too, and you've just come from the hospital. And that you might know that I be God's servant; your husband's setting back there. And he's got trouble too. If I can tell you what your husband's trouble is, will you believe? He's got trouble with his side and with his back. Is that right? Raise up your hand. I'll tell you something else. I see a young man. Your son's setting right back there too. Right. And your son has some sort of spells. That's right. Mrs. Stovall is your name. That's your name, Mrs. Stovall. Go home; Jesus Christ has answered your prayers. You can have what you asked for, in Jesus' Name.

You can hear this whole sermon where the Sign is used here: http://branham.org/messageplayer/59-0329E 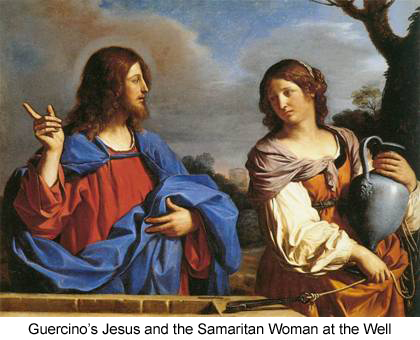 The Sign – God as Ordinary Man:
When the Woman at the Well met Jesus, she saw an ordinary man so she was uncooperative from the start. She said, "Our people don't have any dealings with each other why are you talking to me?" Then when Jesus responded: "if you knew who you were talking too you'd ask me for a drink!" Her retort was quick and simple, "the wells deep and you have nothing to draw with what water can you offer me?" Jesus undeterred said, "Where's your husband?" Her almost classic modern response: "how sexist, I don't need/have a husband!" Then he used the Sign, "you said well, you've had five (living like a woman of ill fame, a perfectly acceptable situation today) and the one you have now is not your husband!"

At that moment she had the opportunity to question Jesus like the Pharisees and ask him: "By what authority do you say these things?" – Or she could have said, "Look man I told you it was none of your business." Wow, look at her true believer response when she saw the Sign, she dropped her water pot and ran into the city:

John 4:29 Come, see a man, which told me all things that ever I did: is not this the Christ?

What is your reaction? Will you believe the Sign coming from an ordinary man? No man in history, other than God the Father and His Son have used this Sign. What is there left to do now but believe. It is a sin to disbelieve.

"You have a right to doubt a man. But when God comes around and confirms it, and it's according to His Word, then it's a sin to disbelieve God."
William Branham, AT THY WORD, LORD, I'LL LET DOWN THE NET, December 7th, 1954