Welcome to The Christian Life Center

Come JOIN a congregation that believes ALL the Prophets have Spoken. We Believe.

Ector was born March 21st 1935 in Holtville CA to Sucha and Louisa Sidhu.

At 2 years old he went to live with Cornelia and Diego Singh on a farm because of the harsh realities of the Great Depression; several years later he was reunited with his family. After moving to the Central Valley, he graduated from Sacramento High School and then went on to earn an Associate degree in the first graduating class of American River College. 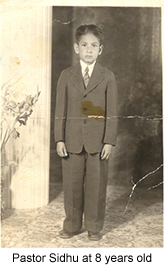 Ector came to Christ at age 22 in 1957. In 1962 he was ordained a minister in the United Apostolic Church in old town Sacramento.

During the Eisenhower administration, he began working in the Aero Space industry as a rocket engine instrumentation technician for Aero Jet, testing Titan and Apollo rocket engines.

During this time he held several Ministerial Associate and Pastoral positions, one of which was the Jesus Name Pentecostal Church of Roseville until September of 1969 when he founded the Christian Life Center (then known as Sacramento Tabernacle) in the home of his nephew.

Today, Ector Sidhu serves as the founding Pastor of The Christian Life Center preaching and teaching every Sunday.